Let me propose something shocking. That the political world has project vision insights to learn and apply. Even more unusual, I’m going back to the nineteenth century once more.

You’re not going to read about the telegraph or the Great Exhibition today. Instead, you’re going to learn directly from a single person. We’re going to study the life and accomplishments of Sir John A MacDonald, Canada’s first Prime Minister.

Why am I interested in MacDonald? I’m Canadian and a history buff, so that’s half of my interest. Beyond that, I read Richard Gwyn’s outstanding biography, John A: The Man Who Made Us, in 2012. I was deeply impressed by Gwyn’s assessment. Unlike America where George Washington’s contribution has been celebrated for eternity, Canadians have struggled to give MacDonald his due.

This article has plenty to teach you about project vision. Even if you’re not Canadian. Even if you’ve never heard of Sir John A. MacDonald before reading this article. Let’s consider just a few of his accomplishments from his long career in public life.

Read on to learn:

This is going to be good. It’s like the history class you never had in school.

How To Write A Project Vision: Confederation

In the 1860s, modern day Canada did not exist. Instead, there were several colonies scattered in the northern half of North America. To the south, the American Civil War raged on. Some in Canada feared that the American conflict would spread further. In this decade, John A. MacDonald laid out his compelling project vision.

He proposed a united Canada. He wanted a strong central government. He also respected the traditions and practices of the provinces. Through conferences at Quebec City and Charlottetown, MacDonald’s vision took shape and gained acceptance.

John A. MacDonald applied the skills and disciplines of politics to project vision. That means a deep understanding of psychology. It also meant understanding that his stakeholders had different needs. He understood the French Canadian concern for their language and fear of English domination. His project vision had the flexibility to change and adjust over time. By the 1880s, for example, he worked to expand Confederation all the way to the Pacific coast.

How To Create A Project Vision Like John A. MacDonald

If I had influence over the minds of the people of Canada, any power over their intellect, I would leave them this legacy: ‘Whatever you do, adhere to the Union. We are a great country, and shall become one of the greatest in the universe if we preserve it; we shall sink into insignificance and adversity if we suffer it to be broken.’ – Sir John A. MacDonald, first Prime Minister of Canada

You’ve read about John A. MacDonald’s vision. You understand some of the challenges he faced in transforming a set of colonies into a country. It’s time to develop your project vision based on the enduring principles he laid down. Don’t be one of those people who joke about never learning lessons from history. You can do better than that.

Nova Scotia, New Brunswick, Ontario, Quebec and Prince Edward Island were not always provinces of Canada. At one point, there were British colonies with their own histories. As the quote above shows, MacDonald had a vision of Canadian greatness.

Assert the importance of your project vision is vital to inspiring your project team. Paint a clear picture of what the project will achieve.

Canada’s founding political document, the British North America Act of 1867, met the needs of many groups. The Charlottetown Conference of 1864 was originally intended to discuss a Maritime union. The Fathers of Confederation including John A. MacDonald, George Brown, and George E. Cartier successfully made the case for an expanded union.

A successful project requires the support of the whole team. By accepting input from your project team and stakeholders, your project vision will become much more powerful.

Three years passed before the vision laid out at the Charlottetown conference became a reality. During that time, John A. MacDonald had many other responsibilities to manage including his law practice. Yet, he kept at the Confederation project until the British North America Act passed.

As you work toward executing your project vision, expect to encounter delays. You may have to travel to meet your stakeholders in person. John A MacDonald had to travel to Quebec, Charlottetown and England to pursue his project. Next time you complain about having to take a flight, just imagine how long your trip would have taken in the 19th century.

How To Choose A Project To Execute The Project Vision: The Pacific Railway

All great projects start with an idea. That idea slowly takes shape and expands into a full project vision. What’s the next step once you’re full of project inspiration?

For John A. MacDonald, his vision of Canada rapidly expanded after 1867. By 1871, British Columbia formally joined Confederation. Thousands of miles separated the new province from the rest of Canada. Few, if any, British Columbia residents would have known Ottawa or any other cities in eastern Canada. Without some kind of project to give substance to Canada, the entire idea could collapse. 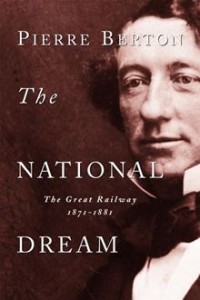 John A. MacDonald and the Canadian government choose to build a railway to British Columbia. This was an incredibly challenging project. No railway of this length had been built in Canada before. Obtaining the financial resources required to complete the project provided a tremendous challenge. The territory and mountains to be crossed by the mountain were uncharted. Despite these challenges, the last spike  was hammered into place on November 7, 1885 by Donald Smith.

In “Built to Last: Successful Habits of Visionary Companies,” Jim Collins and Jerry Porras wrote about the importance of BIG projects. Boeing put the company’s future on commercial jet aircraft decades ago. That decision summoned the resources of the company to deliver.

You can never forget the project triangle of cost, quality and scope. Don’t let it trap you into avoiding big projects. Scoring a win on a big project can transform your career and earn you a place in the history books.

The National Dream that Canada pursued after Confederation was a railway stretching from the Atlantic to the Pacific. That’s a vivid image that made use of the century’s most important technology. The railway was important but the technology was secondary.

When you plan your next technology project, find the visual that’s exciting to think about. If you struggle to find a visual, use this thought exercise. Imagine that your project is wildly successful. Who is happiest about the project’s results? How is their life better? Answering those questions will help you to develop a visually striking project.

I have seen projects that drag on for years on end. Toronto’s public transport projects come to mind. Over the course of a multi-billion dollar project, it’s only natural that people will come and go. Unfortunately, it is more difficult to make an impact on gigantic projects (that’s the downside to the above recommendation “go for big projects”). 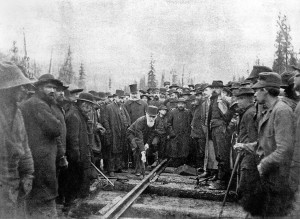 Here’s why you need to add new projects to your portfolio. When you start a project from day one, it’s much easier to shape the project. You get much more responsibility (and the glory of success) when you start a new project. Think of this as the Purple Cow of project management.

There is much more than can be said about John A. MacDonald. I didn’t cover the great personal hardships he suffered through his live. I didn’t discuss his challenges with alcohol. In a short article, I have to make decisions on what to leave in and leave out. Picking and choosing accomplishments to discuss is particularly challenging given MacDonald’s sweeping career.

One aspect of MacDonald’s early career is too fascinating for me to resist sharing. Did you know that MacDonald began his legal career at age fifteen? By the time he was 20, MacDonald opened his first law firm in Kingston. Here’s my take on MacDonald’s early career ambitions. This inspires me to keep working and driving ahead – I don’t have to wait until I’m 40 or 50 to make a big difference in the world.

Question For The Comments.

This article concludes my five part series on project management. I hope you’ve enjoyed the series. More importantly, I hope that you have been inspired to take new action.

What is your favorite historical figure and what have they inspired you to do?

5 thoughts on “The Sir John A. MacDonald Guide To Project Vision”