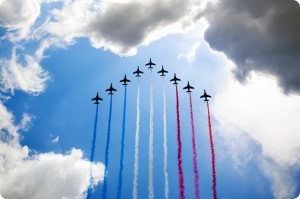 Bastille Day commemorates a key point in the French Revolution: we can also learn project planning lessons from this event. Why write about Bastille Day? It’s the national holiday of France (and one that I’ve observed the Bastille Day Military Parade in Paris). Anything that attracts that much attention from so many people has lessons for me to learn. Over through this article, I’ll imagine what might have been like to be an idealistic revolutionary storming the Bastille. My approach here is best thought of as “inspired by true events” rather than attempting to write a book length treatment.

Let’s set part of the historical context for the event before we get into exploring Before we go further, I will set the stage for key events leading up to the Storming of the Bastille. The Bastille itself was a fortified structure in Paris that was known as a prison. At the time of the Revolution, less than twenty prisoners were in custody. So why bother embarking on such a dangerous personal project at all? There are few reasons for embarking on such a challenging project.

From my reading, there was a symbolic and practical reason to attack the Bastille. The popular appeal of attacking a symbol of oppression is difficult to overstate – consider the popular dismantling of the Berlin Wall in 1989 for a modern parallel. On a practical level, the Bastille had a cache of weapons and ammunition.  In light of the Revolutionary France’s great success with mass conscription, this assumption appears almost reasonable in hindsight.

For history buffs like me, it’s interesting to note that commemoration of Bastille Day has a complex history of its own. The event was marked for the first time in 1790 – an event known as the Celebration of the Federation. As the French government put it: “[the event] celebrated the short-lived success of the constitutional monarchy.” Since the nineteenth century, the official meaning of 14 July has changed. The official website of France puts it in these terms: “For the French, it symbolises the end of absolute monarchy and the beginning of the Republic.” Without further ado, let’s explore the lessons from this event. 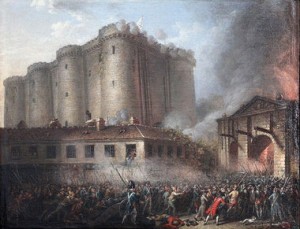 ‘Taking of the Bastille’ by an anonymous artist

Simply put, it is easy to tell whether or not the Bastille has been stormed. That is a key insight to project planning – setting a measurable goal. In my experience, difficult-to-measure goals tend to be demotivating. Contemplating a goal of “travelling the world” is so broad so I simply don’t know where to begin. On the other hand, making a plan to visit France, Spain and Portugal – as I plan to do later this summer – is a clear and measurable goal. With that increased clarity, it is much easier to get started with project planning actions such as browsing through travel books, looking up museums and examining maps.

Returning to our revolutionary idealist – let’s call him Jacques for short – I imagine he would have been excited about this project. I can see him discussing his discontent with the government, high food prices and heavy taxes with his friends. He might even have heard a friend suggest that they should take some kind of action. This discussion could have continued for weeks with no results… Then, someday Jacques hears about the plan to storm the Bastille. Immediately, he can conjure an image of himself freeing prisoners. That is the power of a vivid mental image. For additional guidance on setting measurable goals, I simply have to recommend the Manager Tools podcast on MT Goals.

How To Manage Project Planning Risks

Every project planning effort has to grapple with some risk. You may put in effort and energy and see no results. You may publish an article and get no feedback. You may spend money on a project only to encounter criticism. I’ll be honest – I’ve started two websites in the past and changed direction after a period of time. Deciding to start a project entails some risk of failure. Don’t let that worry stop you!

If you’re storming the Bastille, you face incredible risks. In the eighteenth century, a slight injury could lead to a fatal infection. Even if you succeed in your daring revolutionary act, you face a host of other risks. You would incur the wrath of the police or otherwise attract the attention of the state. Our friend Jacques may have been on the run from the authorities for weeks after storming the Bastille. Fortunately, that’s not a risk most of us face in pursuing a personal project.

Education is one of the best cures for uncertainty. That’s one of reasons why there are so many parenting classes for expecting parents – it is a way for them to reduce their uncertainty. If your personal project involves moving to a new country, start small by reading a book about that country.

If you’re moving to the United Kingdom, for example, The Anglo Files: A Field Guide to the British by Sarah Lyall is a great introduction to British culture.

Meeting somebody who has done a project similar to yours does wonders to increase your confidence. I recommend seeking out a person you can talk in person or by phone. When I’ve done this in the past, I come with a written series of questions in a notebook. Bringing a notebook is one way to demonstrate that you’re serious about learning)

Unlike the chaos of a revolution, you have the choice of setting check-in dates in your project planning document. One approach I favour is start small: work on your project for five days. At the end of the five days, assess what progress you have made and what, if anything, you have lost. In all likelihood, you will have lost nothing (and you may have make good progress if you set a measurable goal).

What You Learn From A French Clergyman’s Revolutionary Pamphlet

Painting Sieyès in 1817 by Jacques-Louis David

In the early moments of your personal project, you are alone. It is just you and a blank Word document. You might wake up suddenly and start to jot down a few ideas on your bedside notebook. You start by coming up with a few ideas. If you’re me, you start to think about books to consult, organizations to join and more. Developing new ideas is a great deal of fun. Sooner or later, you will see that other people are important in achieving project success.

Identifying stakeholders for your personal project is the next step for your project. In the case of the French Revolution, you could visit the cafes of Paris or perhaps seek out members of the Estates-General. Or you could follow in the footsteps of Abbé Emmanuel Joseph Sieyès who wrote a legendary pamphlet that continues to be studied today: What Is The Third Estate? Read on to learn how to apply this practice.

Sieyès’s pamphlet played a vital role in launching his political career. Rather than seeing the Third Estate as the “everybody who was not clergy or aristocrats,” Sieyès defined the Third Estate as the most important political group in France. While defining your stakeholders is helpful, there’s no need to define other groups as unnecessary like Sieyès does in his pamphlet.

Advanced Project Planning Tip: Ask your stakeholders to contribute ideas to your project. In addition to receiving some great ideas, people who participate in your designing your project are more likely to help in the future.

It’s one thing to sit around discussing ideas with friends over coffee or a bottle of wine. That may be the genesis of your project.  In order to give your project shape and definition, it’s important to write about it. Who knows you could end up writing a document that’s studied for centuries into the future like Sieyès.

Explaining your project in person is one way to build interest. By talking with people one at a time, you can learn what they like about your idea. What if you’re simply better at writing than speaking though? Writing a pamphlet, a guide or an article lets you articulate your project vision once and then refer people to it.

Storming The Bastille Is Only The Beginning

Storming the Bastille was a pivotal moment in the history of France. To paraphrase Winston Churchill, that event was only the end of the beginning. The French Revolution continued to unfold for years following July 14 1789. Yes, it’s important to celebrate your project (more on that below). That doesn’t mean that you simply celebrate the project and go on vacation for the rest of your life.

Telling The Bastille Story After You Finish Your Personal Project

Out of all of the events in 1789 France, storming the Bastille is the most memorable story. That did not happen by accident. If you want your project to be remembered and celebrated, you will need to put in some work. Here are two ways that make Bastille Day stand out in our memory two hundred years after the event.

We remember Bastille Day because it is celebrated every year. In Paris, there is a major military parade complete with Air Force participation. In your personal project, you can celebrate the event with a lunch and invite people who made a difference.

In this article, I’ve included a few images showing how artists represented Bastille Day. You can create images to celebrate your project today even if you’re not an artist. You can take a photograph of the project team. You can also ask someone who helped you on the project to create an image.

In the comments, share one of your personal projects and which of the ideas in this article you plan to implement.