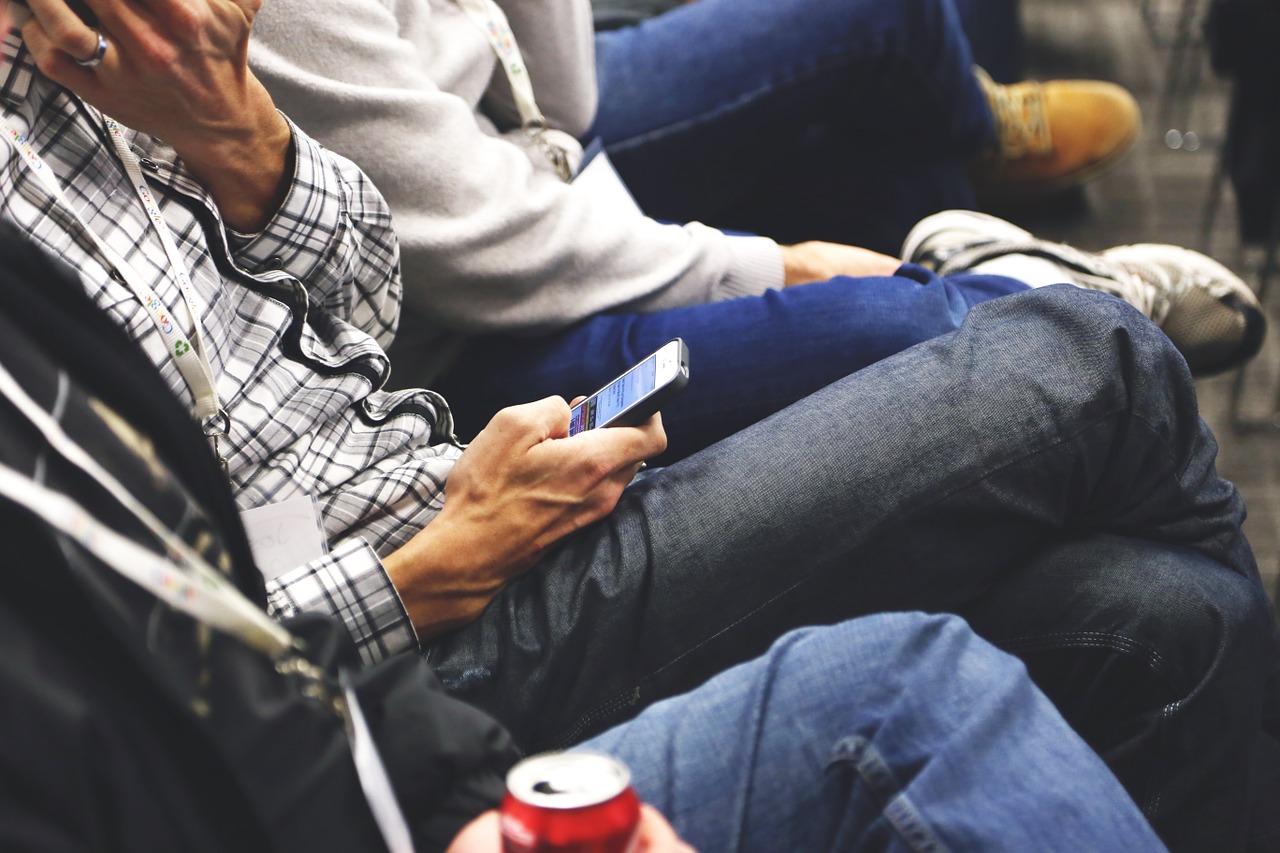 Learning and growing from Internet resources and connections is powerful. You can watch a YouTube video learn a new knot for putting on neckties, read a tutorial about Microsoft Excel and seek inspiration from a TED presentation. I have done all three of those ideas. However, there’s a limit to what you can do with the Web.

Conferences remain one of the best ways to advance your career in a short period of time. Here are several people who transformed their careers and companies through conferences:

As these examples show, it is possible to achieve fantastic results by participating in conferences, trade shows and other live events. Yet, many of us have attended conferences in the past with no results. Speaking for myself, I can think of at least two conferences I attended in the 2000s where I derived little or no tangible career benefits. That all changed in 2015 when I attended the World Domination Summit in Portland, Oregon.

Here are five ways you can grow your career by attending a conference based on my experience.

Goals give your daily activities focus. Based on John Lee Dumas went to BlogWorld to start finding people to interview for his podcast. Mark Victor Hansen and Jack Canfield went to a conference to find a publisher for their book. In my case, I set two goals. First, I wanted to learn how other people had built successful Internet companies (and apply these ideas to ProjectManagementHacks.com). Second, to enjoy and explore a new city I have not visited before.

Action: What is your top goal (or problem) that you are seeking to achieve?

2. Write a short list of conferences that relate to your goal

Once you have identified your goal, it is time to come up with a list of possible conferences to attend. As with many problems, a few Google searches will point you in the right direction.

Example: You are seeking to launch your career in New York City. By searching for the terms such as “New York conference” and related searches, I found the 99u Conference. If you are working on getting ahead as a project manager, I suggest the PMI Global Congress 2015.

Action: Spend 10-15 minutes doing Google searches to find relevant upcoming searches. Note that you may have to broaden your search to events outside of your city in some cases.

3. Do the conference pre-work

If you’re not presenting at a conference, the idea of conference pre-work may sound strange. What exactly do you need to prepare? In my experience, there are a few preparations to make.

Action: Do the pre-work steps outlined in this section.

4. Talk To New People Every Day

Conversations and meeting new people is a key reason to attend conferences. Given that purpose, go out and introduce yourself! Most if not all conference attendees wear name badges which make introductions even easier.

Action: Commit to introduce yourself to at least one new person each day you are at the conference.

5. Take Advantage of the Post Conference High When You Get Home

Going to a conference is often an inspiring and energizing experience. You are full of new ideas, you may have enjoyed some great drinks and have a stack of business cards. On the trip home, you may feel exhausted and happy. What about a few days after you return home – how do you take advantage of the conference high?

Start with the following actions:

Now it is your turn to take action. What conference will you attend to grow your career this year? Conferences remain one of the best ways to grow your network, receive instruction from experts and set yourself apart from others in your field.

Action: Send an email or make a call to someone you met at the conference after you come home.

6. Write A Conference Report For Your Company

If your company or organization paid for you to attend a conference, you are very fortunate. The best way to repay the organization is to use information and connections from the conference to do your job better. In addition, I suggest writing a one page memo summarizing your key insights from the conference. You can then take this summary to your manager and offer to circulate it with the rest of the team.

Action: Write out a list of 10-20 bullet points of information and insights you gained from the conference.

I have followed Chris Guilebeau’s blog and books for years but only attended his conference, the World Domination Summit (WDS) in 2015. When Chis came to Toronto in 2014 to promote his new book The Happiness of Pursuit, I had the chance to meet him (see below) and interview him (How Quests Transform Your Leadership — An Interview with Chris Guillebeau). I was also delighted to receive a Willy Wonka-style “Golden Ticket” to attend the World Domination Summit – a thoughtful touch that I appreciated. 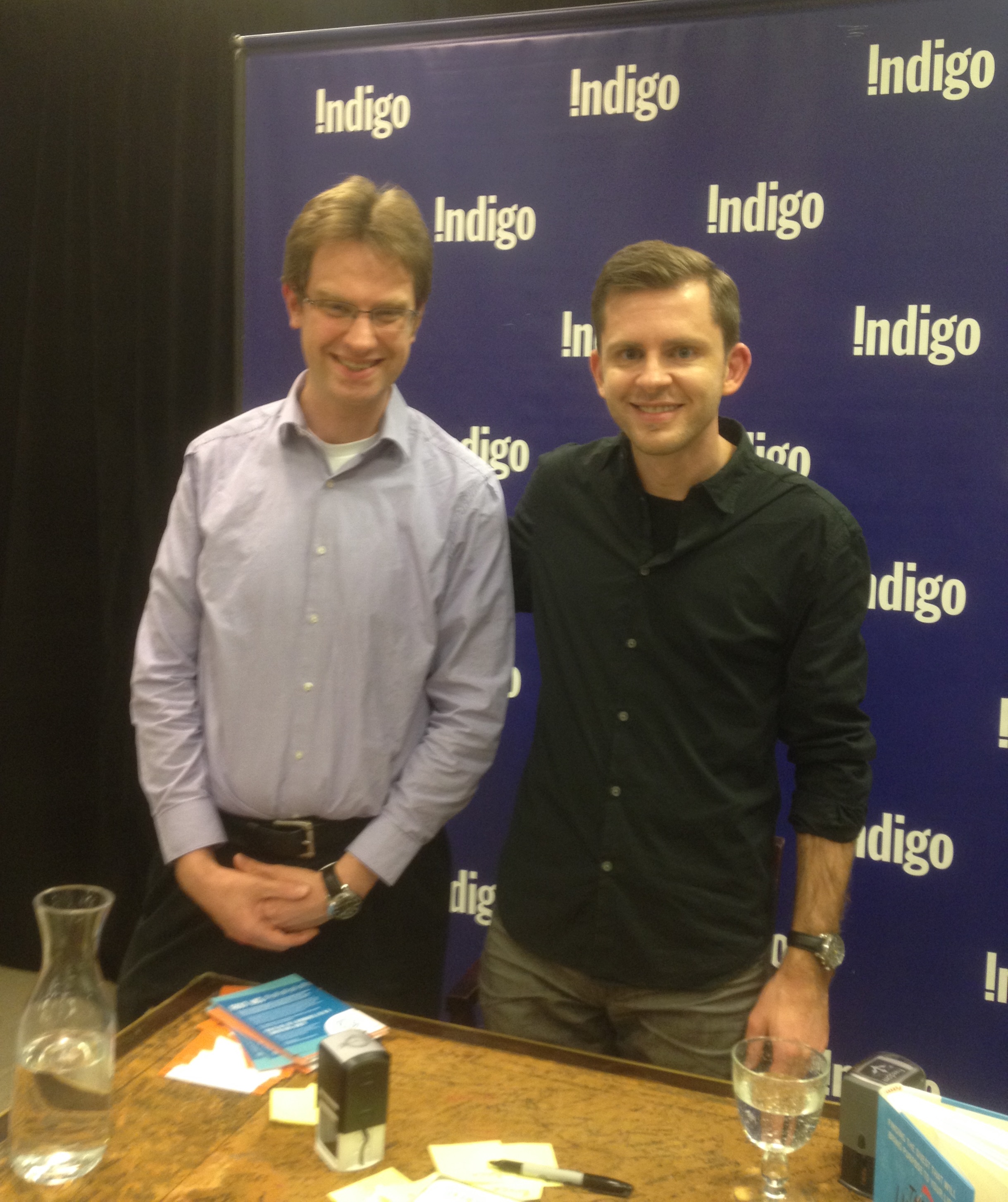 Image: Bruce Harpham and Chris Guillebeau during the “Happiness of Pursuit” Book Tour in 2014.

In today’s article, I will share a few of my observations, lessons learned and other notes about my experience. In addition to being a testimonial in favor of WDS, please read this post as a reminder of the benefits of participating in conferences.

Before the event started, attendees were invited to propose and register for “meetups”: unofficial networking groups for people looking to explore their own interests. I love connecting with people in small groups, so this was a perfect fit for me. There was a great deal of options available and I ended up attending three meetups.

Lesson: Look for small groups, meetups and other events at the next conference you attend. It is an excellent way to deepen relationships, have fun and make the most of the conference experience.

As my friend Jennifer Polk recently explained, some people have a tendency to treat conferences like a course: furiously take notes, study and avoid socializing. That’s a tendency I sympathize with and put to full use in attending the WDS Academies (i.e. three hour workshops dedicated to specific topics).

On the Thursday of the conference, I participated in two academies that connect with my goal of building ProjectManagementHacks.com into a business.

The Location Rebel Academy is based on the idea of building an online business that you can run from anywhere in the world. I found the program that Sean laid out – earning money through freelance services before transitioning to a passion business – a good idea. A highlight of his Academy was bringing in several people who presented case studies on their ideas and how they have built their own online business. I also admire Sean for publishing his bucket list (and I’m impressed at how many of the activities he has already completed). In Sean Ogle’s event, I was the first person on stage to ask a question. Unintentionally, this meant that a number of other people knew about me and introduced themselves later in the conference.

Jonathan Field’s academy explores the art and science of crafting a clear brand or marketing message for one’s company. I found the marketing message templates he provided (e.g. “I help [TYPE of PEOPLE] overcome [PROBLEM] despite [OBSTACLE]”). It was also great to take notes during the extended question and answer session at the end of the academy. Of course, it was also a pleasure to briefly chat with Jonathan at the end of the event. 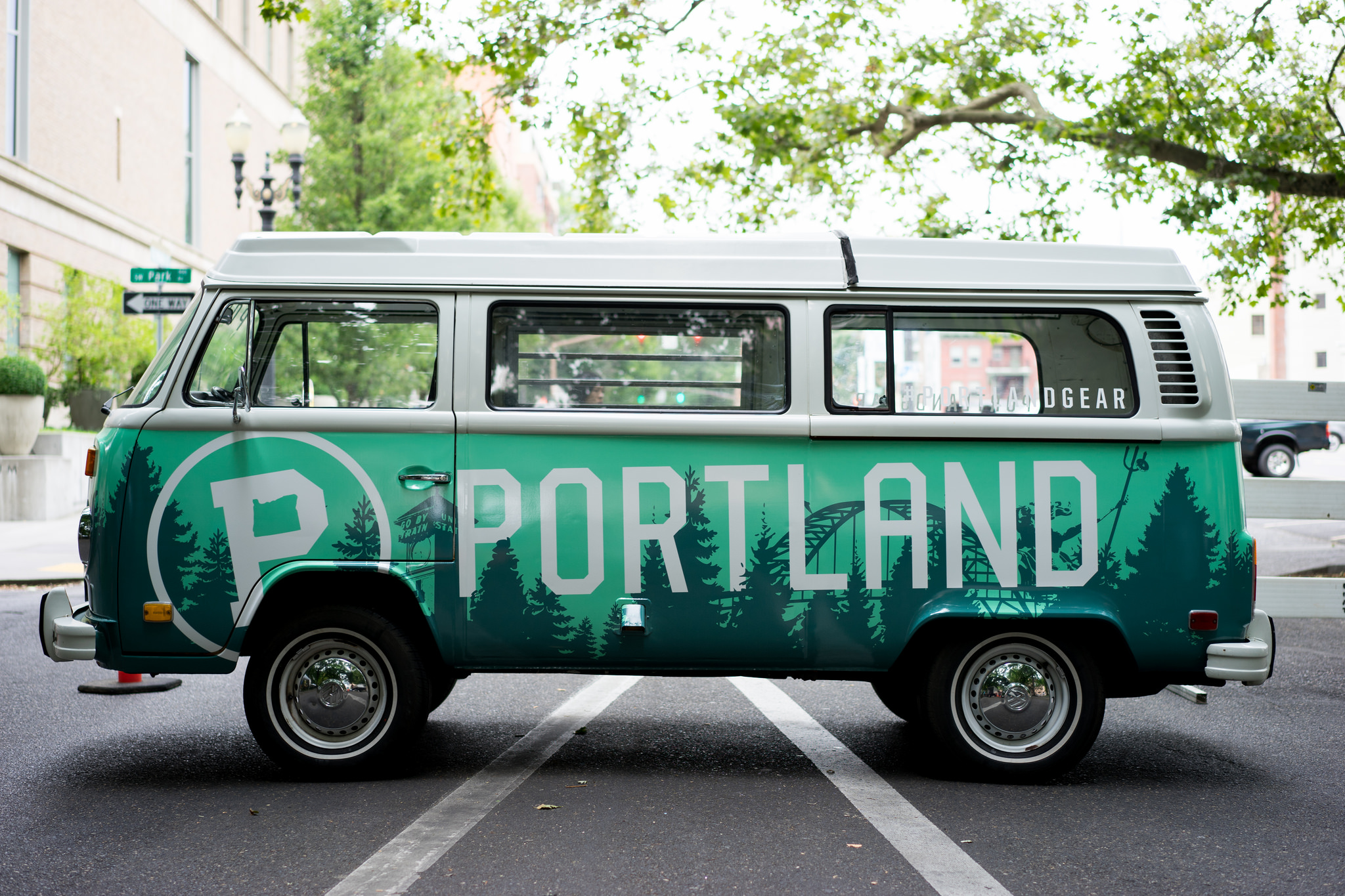 Prior to the World Domination Summit, I had never visited Portland, Oregon. I very much enjoyed the idea of exploring a new city and playing the part of the tourist. Based on recommendations from several people, I made Powell’s – Portland’s famous independent bookstore – my first stop. I also enjoyed several meals at Portland’s food trucks (I most enjoyed a vegetarian Indian food truck) and one donut at Voodoo Donuts. Here are a few of the highlights from my exploration of Portland.

During Saturday and Sunday, the main stage events of the World Domination Summit unfolded at the the Arlene Schnitzer Concert Hall. Here are three speakers that I find most interesting and relevant to my interests.

I stayed an extra day in Portland in order to attend the Monday Academies. It was well worth the effort and time. As an added benefit, the Monday Academies I attended were smaller (i.e. around 100 people each vs the 300+ on the Thursday Academies) which meant more interaction with the presenters and other attendees.

What a great workshop in concept and execution. Many people make the mistake of attending a conference, absorb new ideas and experiences and then never act on the information. This workshop provided a workshop, great discussions and a roadmap to work on our goals. I went into the workshop with a firm idea of a specific 2015 goal for ProjectManagementHacks.com. As a result, I have firm ideas on what to work on next.

Wow! This was an incredible workshop covering a variety of topics related to body language, conversation and related skills. At times, I felt somewhat overwhelmed by the depth of Vanessa’s material. Two of her recent blog posts will give a sense for what she can provide:

Body Language of Leaders: Harvey Specter (as a fan of SUITS, I liked that post!) and 7 Days to a Better First Impression. I have more work ahead of me to review Vanessa’s material and make the most of it.

Anyone who knows me well knows that I love books. I brought books with me to read at WDS and ended up buying several while in Portland. As this post is already quite long, I will share just a few highlights:

Books Purchased (at Powell’s and the WDS Bookstore)

For fun, let’s end with a photo of the Darth Vader Bagpiper (aka The Unipiper) who made an appearance during WDS: 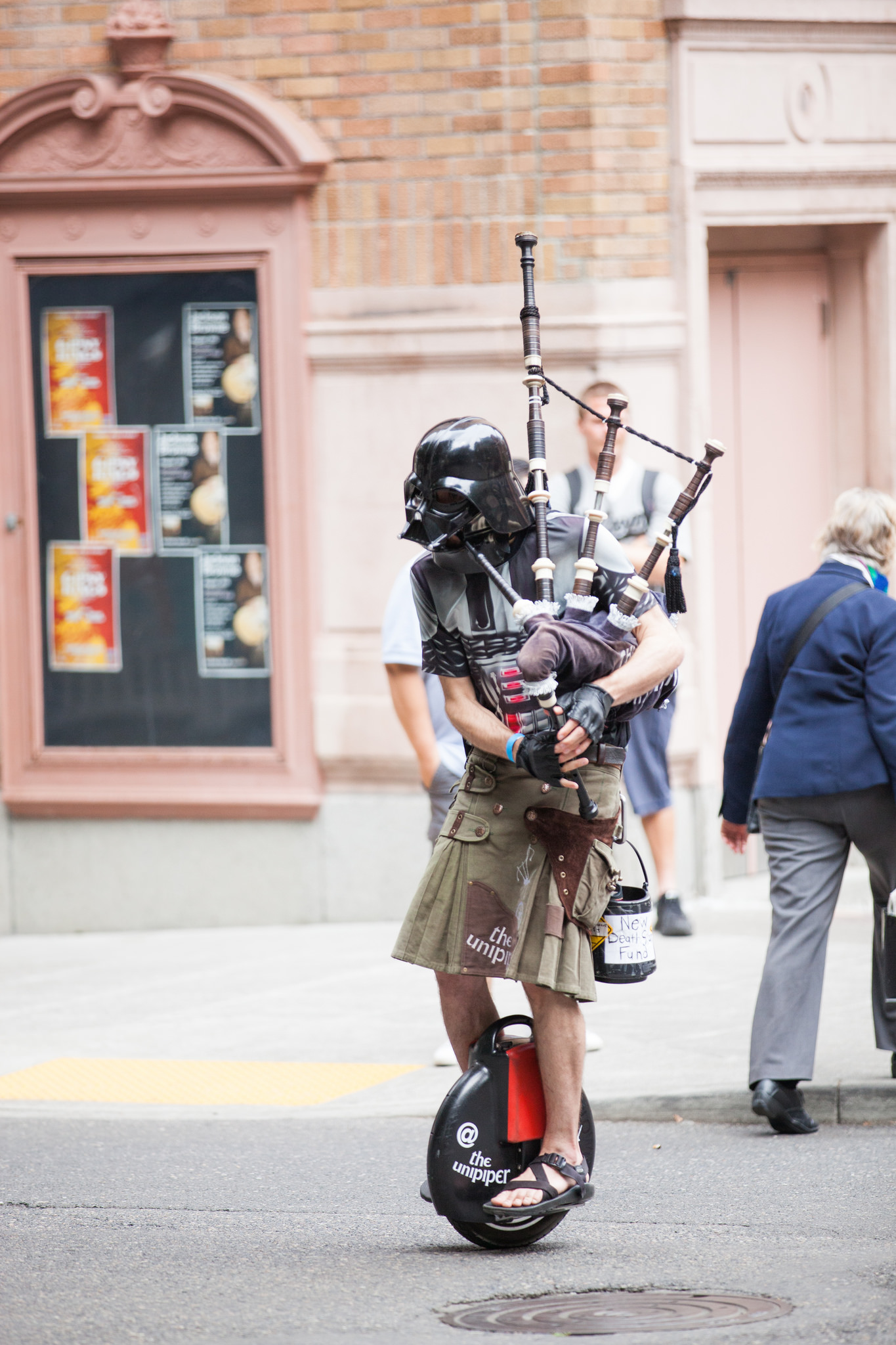